Pozidriv, commonly spelled incorrectly as “Pozidrive”, is an improved variation on the Phillips drive design. After the patent for the Phillips head expired, the company GKN Screws and Fasteners created the Pozidriv design.

Can I Use a Pozidriv on a Phillips Screw? Or Vice-Versa?

While we at Albany County Fasteners do NOT recommend using the improper drive style on a screw, technically speaking you can. A Phillips drive style fits into a Pozidriv drive recess decently when using the right size. It’s important to note that even if the Phillips does fit snugly into the drive recess, it is still much more likely to strip or cam-out than when using the proper driver.

Alternatively, you can attempt to remove a Phillips screw with a Pozidriv drive but they do not fit into the Phillips drive recess snugly and are much more likely to slip or damage the recess during removal.

Where Are Pozidriv Screws Used?

Pozidriv screws can be used just about anywhere, although they are not nearly as popular as standard Phillips screws. Over the years, many other drive styles, such as the Torx and Robertson, have come out as being more reliable than the Phillips drive style at preventing cam-out and stripping. The Phillips drive is still extremely popular in manufacturing due to its self-centering design but is starting to lose popularity for manual applications due to other drive styles having a better design.

Benefits of the Pozidriv Drive Style

How Do You Identify A Pozidriv Screw?

While Phillips and Pozidriv screws look similar, Pozidriv are actually quite easy to recognize at a glance. This is due to four notches marked into the head of the Pozidriv screw that are not present in the Phillips Head Screw.

The Pozidriv is an improvement on the Phillips drive by increasing its torque capacity without increasing the likelihood of cam-out. It also has greater surface area contact with the drive recess. This makes it less likely to strip when installed correctly. In general, you can determine if a Pozidriv screw should be used over a Phillips screw by asking the question “How much torque do I need for this installation?” If the answer is a minimal amount of torque, the Phillips drive will work, otherwise, use the Pozidriv. As an improvement on the original Phillips style, the Pozidriv style is better than the Phillips.

The Torx, or Star, drive style vastly changes the design of the drive recess. Due to the star having six points of contact (6-Lobe), the screw uses a truly radial force rather than an axial force. Phillips and Pozidriv screws use an axial force to drive the screw which is not as effective and is more likely to cause cam-out. For manual applications, Torx screws are quickly becoming the most popular choice.

The Robertson, or square, drive is quite common especially throughout Europe. The square drive offers a unique style as it must fit perfectly into the drive recess to drive properly. When it comes to Robertson vs. Pozidriv styles for manual applications, the Robertson is the winner. However, the square drive is not nearly as popular as the star drive style. 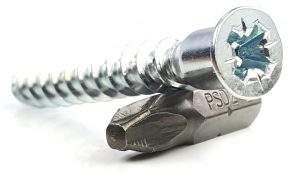 While the Pozidriv drive style is an improvement upon the Phillips drive style, the Phillips is still incredibly popular and does not seem to be going anywhere any time soon.

Should you be in the manufacturing field and find you are having trouble with cam-out, you may want to attempt a Pozidriv configuration. It will give you the added benefits of a reduced cam-out with a better fit into the drive recess while preserving the self-centering functionality that is a must for manufacturing. For manual applications however, both the Star and Square drives are better choices to better suit your needs.