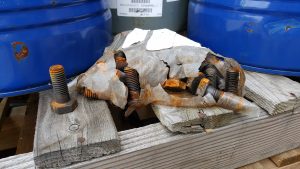 Dealing with fasteners surely means dealing with waking up and realizing there is a horrible rust streak running down the side of your project from a screw that has begun to rust. But Why? What is rust anyway? What other types of corrosion may be occurring that you did not even realize? Today we answer that question and we start, with rust.

Rust Is the Result of Oxidization.

Wait…Before we explain, we must talk about the untold truth. There are three kinds of rust! THREE? Yes, three. Since you probably are only familiar with the most common red rust, that is where we will begin.

Red Rust is actually a mixture of four things.

When Iron/Steel is exposed to water and oxygen for a long period of time the iron/steel actually combines with the oxygen on the atomic level. This creates rust or ferric oxide. Once this process has begun it begins to deteriorate the metal itself.

Underneath this reaction hidden by the red is actually another layer of oxidization known as black rust or black oxide. This layer is harder and thicker than red rust and can also be called magnetite. This rust will stay tightly bound to the to the base material and act as a partial protection from a further oxidization process. Note: We were not able to create this type of rust as an low oxygen environment is typically needed to induce black oxide. 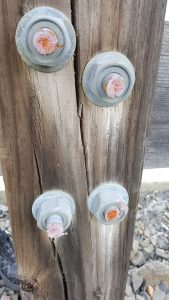 White rust occurs on the surface of Zinc plating. It appears as a coating of powdery white zinc oxide. This oxidization process will occur just from being exposed to the atmosphere but can be avoided by adding a chrome coating before it has been exposed for a long period of time.

This is a HDG carriage bolt whose end has been sheared off.

The lack of protective coating on the end has led to the the coated material corroding.

You can also see that light zinc white surface corrosion has also started to take place.

There are two types of corrosion that can occur resulting in these rusts. There are also several forms in which oxidization commonly takes place.

The first type of corrosion is through direct contact with the harmful chemicals. These chemicals can be anything that compromise the integrity of a material. From acids to oxides themselves as long as the material physically comes in contact with them the result is corrosion.

This type of corrosion is entirely based on two metals being paired that have electromagnetically dissimilar properties. We won’t go into the chemical details here but basically the two metals try to even out their electromagnetic properties. This will compromise the materials resulting in faster corrosion in one metal while slowing it down in the other. 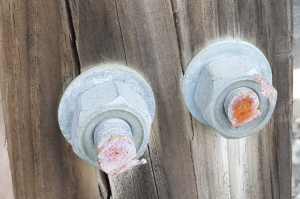 As we now know, in order for oxidization to occur there must be some factor coming into contact with the material.  This can happen in many different way but there are a few that are considered the most common.

This type of corrosion occurs when stress exerted on a material meets with the corrosive effect from some other property whether it be environmental or physical. This is commonly referred to as environmental hydrogen embrittlement.

This is the most common type of corrosion created by the material being in a harsh environment. Whether it be sand or a damaged material prior to being installed, this exposure between the metal that has been coated and oxygen which leads to oxidization or rust.

This occurs by corrosive chemicals being caught in small areas in the material and being held there. This will result in corrosion occurring faster. 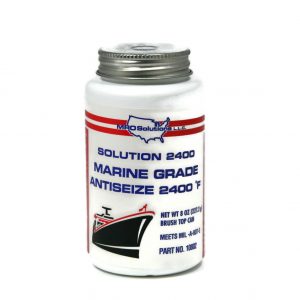 As you can see rust is everywhere. Luckily, we can combat corrosion and oxidization in a number of ways. The first is to be vigilant about the materials you are using for your projects. Make sure they fit the environment you need them to. For more information on materials and their environments you can check out our fastener material resource guide here!

Another option, which we also recommend doing with the correct materials is using MRO anti-seize solutions! This anti-seize can make installing screws and bolts a breeze but will also add a thin corrosion resistant coating that may extend the life of your fasteners.