Please note, due to Covid-19 limitations and peak holiday season rush, USPS, UPS and FedEx are experiencing transit and tracking delays. Tracking may show statuses of "In transit" or "pre-shipment" until the delivery scan and packages may arrive outside of standard delivery times. Please see carrier Holiday Shipping Deadlines below:

Types of Rivet Guns and What They’re Used For

In order to understand rivet guns, the first thing to do is understand how a rivet works. Blind rivets, often referred to by the brand name POP rivets, are an incredibly useful fastener designed to hold two materials together with a clamping force. POP Rivets are comprised of two pieces: the hat and the mandrel. The mandrel goes through the inside of the hat and gets pulled during installation. As the mandrel is pulled through the hat, it deforms the back of the hat.

Once the deformed portion grips against the back of the installation material the mandrel snaps leaving a clean finished application. It is common for this type of rivet to be used when you cannot get to the back of an installation earning this fastener the name of Blind Rivet. There are several exceptions to this including shave rivets (a rivet where the mandrel needs to be shaved down with a special tool after the installation).

Knowing how rivets work is great but how do you install them? A rivet requires a tool that keeps the hat of the rivet firmly pressed against the installation surface while simultaneously pulling the mandrel away from it. These tools are commonly referred to as rivet guns, riveters, rivet tools or riveting tools. Not only are there many things to call a rivet gun, there are also many varieties.

While not all rivet guns were made equal, it is easy to identify the type of rivet gun needed for an application. Read along as we cover the pros and cons of each type or riveter.

Hand powered POP rivet guns work with a simple lever and squeeze technique. The first step when using one, is to choose the appropriate sized nose piece. Rivet guns normally come with several options to fit a range of blind rivets. Hand-operated riveters fit a variety of rivets, are usually made of mostly steel with a rubber grip and offer the cheapest cost.

Hand Rivet Guns are an excellent choice for the occasional user. If you find your project having just a few rivets, then this will do the trick. The biggest con on this riveting tool is the squeeze and the amount of time it takes. Used repeatedly, it can be very stressful on the hands, wrists and forearms making it less than ideal for projects requiring many rivets. 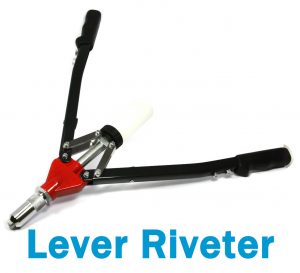 Lever Riveting Tools are the next step up in rivet guns. They also come with nose pieces but work with a wider range of rivet sizes. Lever rivet tools tend to be more heavy duty that a hand rivet gun and are easier on the user. Due to their larger size and lever action, they reduce the amount of physical strength required by the hand riveter. They also come with a collection bottle that catches the snapped mandrels after installation.

The lever riveting tool is an excellent tool found on many job sites. It makes installing blind rivets easier than using the hand riveter but is still manually done. It does come at a higher price point than the standard hand riveter but also comes with the ability to use a wider and larger range of rivets.

Battery Powered POP Rivet Guns come in many varieties. The two main types function basically the same way, except for the last step. One type of battery powered rivet gun spits the mandrel out from the front of the gun and the other pulls the mandrel into a mandrel holder, so you do not need to worry about them until emptying the catch.

Battery powered riveters are great for the job site. They offer the versatility of not having a cord and the ease of simply pushing a button to install the rivet. Choosing the version with the mandrel catch is typically more expensive than the other battery powered option. The catch version makes installations faster by collecting the mandrels for you but be careful not to over-fill the catch or the gun may jam.

Pneumatic Rivet Guns are powered by compressed air to very quickly and easily install blind rivets. With a built-in catch, the pneumatic riveting tool is easily the fastest way to install rivets. 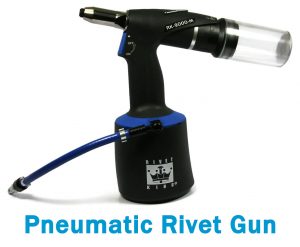 The downside to pneumatic riveters is that they require a hosed connection to compressed air. This limits their versatility and portability more than any of the other tools available, but if the project requires installing a large number of rivets, this is undoubtedly the best tool to use to get it done. It also comes at a significantly lower price point than the electric powered tools.

Shave Rivet Tools are a special tool used specifically for shave rivets. On shave rivets, the mandrel does not completely break off. The remainder is then shaved down using one of these tools to create a clean finish on the exposed hat portion. They are commonly used in trailer-based applications to resemble a buck rivet and leave a smooth head without the traditional hole of a standard blind rivet. 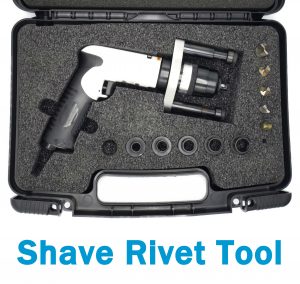 There are cheaper versions that act as an adapter to a cordless drill. These are more commonly bought by the DIYer or someone planning on sparingly working with shave rivets. The pneumatic option is much more expensive but works much faster and has supports to provide a smoother finish. They are commonly found in industries that use shave rivets on a regular basis.

Which Rivet Gun is the Best?

Now that we’ve gone over the many varieties of riveter tools, it’s time to determine which to buy when. Since one riveting tool isn’t necessarily “better” than the other we will instead identify which tool you should get depending on your situation.

While many tool varieties have options available that are totally unnecessary, the rivet gun varieties are different. Each tool has a place in each situation and they perform very well when placed in those situations. Before buying one for yourself, decide what you work with the most often and be realistic about the goals you wish to achieve with the tool.