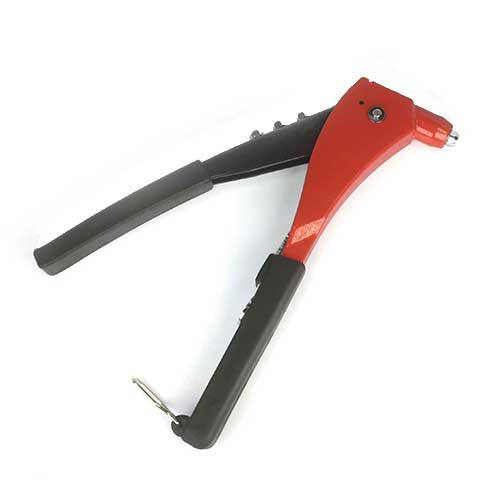 
What is a Pop Rivet?

POP rivets connect two pieces of material in a quick, efficient manner with a hand riveter or pneumatic rivet gun. They are tubular and comprised of a hat and mandrel; the mandrel's length snaps off when installed. The hat and mandrel can be made from the same material or a combination of two materials. Rivets are measured in installed grip range and length.

How do Pop Rivets work?

Where access to the two sides of a segment is constrained, a hole is first made through the parts to be joined. A pop rivet is then embedded through the hole. The rivet body is then brought into contact with the parts. A pop rivet gun is set on the rivet, pulling the mandrel into the rivet body, making it grow and grasp the pieces together. Once gripped, the mandrel snaps, holding the rivet in place.

How many varieties of Blind Rivets are available?

The answer is MANY! See the list of available options and descriptions below:

Open-end blind rivets create a fast and tight assembly; however, they are not watertight. Open End Rivets get their name because the mandrel is exposed at the rivet's bottom before installation. Open-end rivets are available in stainless steel, aluminum, and zinc-plated steel. Color options are available in aluminum for this type.

Closed-End Blind Rivets differ from a standard pop rivet in that they feature a flat, closed end, which creates a watertight seal. Also known as a waterproof rivet, they are distinguished by their flat top. The mandrel is encased within the blind rivet itself.

A countersunk blind rivet, also known as a Flat Rivet, is used in countersunk holes and, once set, finish flush to the surface. They are used in tracks where the head will not protrude into sliding tracks or rollers. The hat of the rivet is almost inverted, with a 120-degree countersink in the integrated washer.

Large flange, also known as Oversized, have a larger washer on the hat than standard. Large Flange Rivets are tubular, comprised of a hat and mandrel; the mandrel's length is snapped off when installed.

Tri-Fold Rivets are designed to create three anchor points on the blind side of the installation. This makes a wider bearing load spread, which is ideal for thin metals and plastics. Tri-Fold Rivets are commonly used in automotive, trailer, and appliance applications.

Structural or interlock blind rivets create a more robust assembly than standard pop rivets because of the amount of force they generate. Domed head rivets in this selection are commonly referred to as both Interlock and Structural Rivets.

These fastener assortment kits include popular size runs of pop rivets in domed head, countersunk, closed end and large flange varieties in both 304 stainless steel and aluminum. Pop Rivets included in Rivet Kits are either corrosion resistant Stainless Steel, or lightweight Aluminum as described in each kit title.

For more information on rivets including numbers (6-6 or 66), measurements, how to install rivets, grip range and more, please review our Rivet Guide in Fasteners 101.