It’s one of the more common questions asked in our industry. Which applications should use screws and which should use nails? While there is no easy answer as we will soon learn, The basic theory is simple. Screws for holding power and nails for shear strength. But just what does that mean? How do we know when that kind of force will be present? To answer these questions, we sat down with our fastener expert to discuss screws vs nails.

Screws are fasteners with a drive located in the head and threading that protrudes down the length of the shank. Screws (most of the time) require a pre-drilled hole and can often cut their own threads into materials they are rated for. For the sake of argument, we are going to be discussing a deck screw for this example. Deck screws are exceptionally engineered to hold two boards of wood together tightly and efficiently.

Nails are fasteners with a flat head, smooth shank and sharp point. Nails are driven by a hammer into materials to hold them together. They can be installed faster and are cheaper than screws. In this case (and to explain the theory), we will be using a smooth shank screw as our example.

So when comparing nails vs screws we need to consider a few factors. Grip strength and shear strength being the two most important. To view these forces we’ve created some simple diagram. Assume that the arrows are the forces acting upon the two boards in the pictures shown.

Grip strength, in this instance, will refer to a fasteners ability to hold in wood. When a screw is driven its threads dig into the material around it. This makes screws more difficult to remove as they need to be spun out of the wood. So as an example, lets take a tray with a wood board screwed onto the bottom. This board is going to be able to hold quite a bit of weight without the screws falling out. Conversely, if nails were used they would not be able to hold the same amount of weight without starting to loosen.

Now lets look at shear strength. Shear strength is the amount of force a fastener can handle from the sides. A nail, has more elasticity than a screw. This means as forces are pushed against the sides of a nail, the nail can bend slightly to accommodate these pressures. A screw conversely has very little shear strength. Screws that are bent will almost always snap when trying to be straightened.

So which is better a screw or a nail?

Now a real life scenario where we see this happen all the time is in decking. The forces wind creates on the bottom of a deck (especially in hurricanes) can be catastrophic. As a result, when you install hurricane ties, you want to use nails to install them as the forces that act upon them will shear screws straight off. But these same forces that come up from underneath a deck will push on the bottom of the boards you walk across and since that pressure is pushing directly against the fasteners head, you will want better grip strength making screws the appropriate choice.

As with all fasteners, each has its own unique positive and negatives and must be chosen accordingly. There are also outliers to this rule. Ring shank nails are one of the many varieties of nail available that can provide better retention add some very strong adhesive to that and it’s even less likely to come out. In theory though, the answer is simple. Need grip strength? Use a screw. Need shear strength? Use a nail. 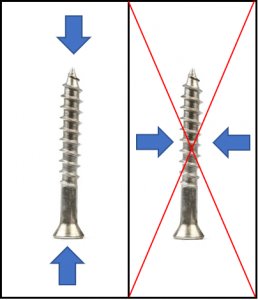