How To Properly Cut, Deburr and Chamfer Threaded Stud

Many projects use threaded rod, also commonly called all thread, for hanging and stabilizing structures or objects. The biggest problem is that often, you can only find it in specific lengths that may not be suitable for your project. This means you will need to cut, deburr and chamfer the all-thread down to size.

To cut threaded rod down to the size you need is fairly simple but can leave some nasty burring on the end of the stud making it hard to fasten a nut onto. We sat down with our fastener expert and asked him how to cut clean threaded studs from a long bar of threaded rod.

The first thing to do is measure your threaded rod to length. After you have measured and marked your threaded stud, insert it into your chop saw. Some chop saws (like the evolution industrial chop saw) have a small vise for holding the material being cut, in this case all thread, in place while keeping your hands at a safe distance. Simply bring the saw down and cut through the threaded rod.

The abrasive saw also generates significantly more heat which can make the threaded rod hot to the touch so wear gloves. The cold cutting blade reduces this increase in temperature significantly. Still wear gloves for safety! 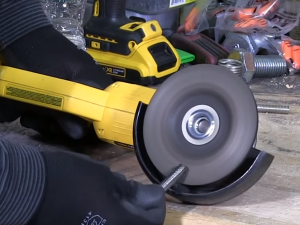 Now that you have a piece of threaded rod cut down to size, the next step is to remove and burring caused by cutting the rod, to do this you will need a grinder. Simply, take the threaded stud you cut and press the end against the grinding wheel to remove the burrs and smooth out the cut end.

Chamfering is the process of removing the end of the threading and cutting an angle into it. Chamfering is done to clean up the start of threads so a nut can be easily fastened to the rod. To perform this process we use a tool called the Uniburr. A Uniburr is a cone shaped tool that attaches to a drill and quickly chamfers away the edges of a fastener. 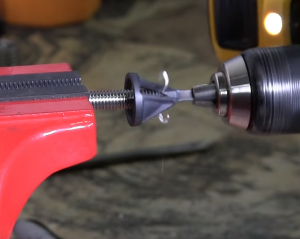 Now that you have cut, deburred and chamfered your threaded stud, the only thing left to do is go use it!