Also Known as TEK Screws, Drill Point, Self Drillers and Self Tapping

No Matter what you may call them, a Self Drilling Screw is a time saver! Self Drilling screws feature a distinct flute or drill point at the end of each screw, as well as self tapping threads to turn a three-step installation into one quick job. The TEK drill point, as well as the self tapping threads of the screw eliminate the need for pilot hole drilling and hole tapping before screw installation. Self Drilling Screws are used primarily when fastening into steel or other metals, and are typically used to join materials like sheet metal.

Self Drilling Screws are primarily made of harder metals, or treated to make the material harder. Typical materials include hardened Zinc Plated Steel, and 410 Stainless Steel. This is to ensure that the drill point is a harder metal than that into which the screw is being installed. 410 Stainless Steel is ideal for Self Drilling Screws because it maintains the corrosion resistant properties of standard 18-8 Stainless, but can be heat-treated up to 40 Rockwell C. This is why self drilling screws are commonly used in roofing applications in combination with a watertight neoprene sealing washer, and for attaching metal roofing and siding panels to metal stud framing.

Not All TEK Screws are Created Equal

The distinguishing drill point of a Self Driller is what makes them unique, however these points come in different lengths for different applications. The Drill Point of one of these screws is given a TEK number, which can be determined by the length of the flute. TEK points are available in TEK 2, 3 and 4-5. The typical 25 to 16 gauge metal will require the use of a TEK 3, but 14 gauge and below will require TEK 4-5. This is why TEK 5 screws are used for fastening into structural steel. As a general rule of thumb, the higher the TEK number (the longer the drill point), the thicker the metal. It is fundamental that the point is high enough on the TEK scale to pierce the metal being drilled into.

Check Out Our Selection of Self Drillers Today!

For More information on Self Drilling Screws, including seeing them in action, check out our video below 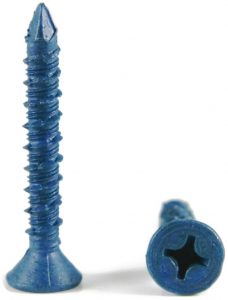 Tapcons are a type of masonry anchor used for light duty fastening to concrete, brick, block and other masonry materials. They are commonly called Concrete Screws or blue screws because of their appearance and how they function. Like all Masonry Anchors, Tapcon Concrete Screws are installed into a hole drilled into the material. They are available in both Slotted Hex Head and Phillips Flat Head varieties.

Tapcon Screws work by tapping threads into a pre-existing hole with advanced thread-form technology. The threads of the screw cut into the material surrounding the hole, ensuring a strong and snug fit. The diameter of the pilot hole is determined by the diameter of the screw. It is important that the hole be slightly smaller than the diameter of the screw so that the threads can tap properly. For 3/16″ diameter Tapcon Screws, a 5/32″ drill bit is used for the hole and for 1/4″ Tapcons a 3/16″ masonry drill bit is used. Tapcon Concrete Screws are removable, however it is not recommended to reuse the same hole because the cutting threads can compromise or destroy the holding power.

Tapcons are most commonly seen in the Blue Climaseal™ ceramic coating finish. This blue coating is uniquely applied to the alloy steel fastener in multiple stages through dip-spin technology. The coating provides extended protection against corrosion and rust for the fastener, making the concrete anchors suitable for exterior and long-lasting applications.

Check Out Our Selection of Tapcon Concrete Screws Today!

Our Fastener Expert shows us how to install concrete screws.